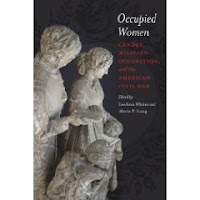 From the publisher:
In the spring of 1861, tens of thousands of young men formed military companies and offered to fight for their country. Near the end of the Civil War, nearly half of the adult male population of the North and a staggering 90 percent of eligible white males in the South had joined the military. With their husbands, sons, and fathers away, legions of women took on additional duties formerly handled by males, and many also faced the ordeal of having homes occupied by enemy troops. With occupation, the home front and the battlefield merged to create an unanticipated second front where civilians--mainly women--resisted what they perceived as illegitimate domination. In Occupied Women, twelve distinguished historians consider how women's reactions to occupation affected both the strategies of military leaders and ultimately the outcome of the Civil War.

Alecia P. Long, Lisa Tendrich Frank, E. Susan Barber, and Charles F. Ritter explore occupation as an incubator of military policies that reflected occupied women's activism. Margaret Creighton, Kristen L. Streater, LeeAnn Whites, and Cita Cook examine locations where citizens both enforced and evaded these military policies. Leslie A. Schwalm, Victoria E. Bynum, and Joan E. Cashin look at the occupation in light of complex and overlapping race, class, and cultural differences. An epilogue by Judith Giesberg concludes the volume. Some essays reinterpret famous encounters between military men and occupied women, such as those surrounding General Butler's infamous "Woman Order" and Sherman's March to the Sea. Others explore new areas such as the development of military policy with regard to sexual justice. Throughout, the contributors examine the common experiences of occupied women and address the unique situations Union, Confederate, and freed women all faced.

Civil War historians have depicted Confederate women as rendered inert by occupying armies, but these essays demonstrate that women came together to form a strong, localized resistance to military invasion. Guerrilla activity, for example, occurred with the support and active participation of women on the home front. Women ran the domestic supply line of food, shelter, and information that proved critical to guerrilla tactics.

By broadening the discussion of the Civil War to include what LeeAnn Whites calls the "relational field of battle," this pioneering collection helps reconfigure the location of conflict and the chronology of the American Civil War.

LeeAnn Whites is a professor of history at the University of Missouri. She is the author of The Civil War as a Crisis in Gender and Gender Matters: Civil War, Reconstruction and the Making of the New South and coeditor of Women in Missouri History: In Search of Power and Influence.

Alecia P. Long is an assistant professor of history at Louisiana State University. She is the author of The Great Southern Babylon: Sex, Race, and Respectability in New Orleans, 1865-1920, winner of the Julia Cherry Spruill Prize for the best book in southern women's history in 2005.