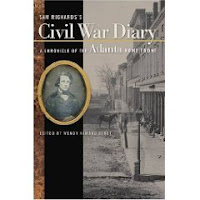 From the publisher:
This previously unpublished diary is the best surviving firsthand account of life in Civil War-era Atlanta.

Bookseller Samuel Pearce Richards (1824-1910) kept a diary for sixty-seven years. This volume excerpts the diary from October 1860, just before the presidential election of Abraham Lincoln, through August 1865, when the Richards family returned to Atlanta after being forced out by Sherman's troops and spending a period of exile in New York City.

The Richardses were among the last Confederate loyalists to leave Atlanta. Sam's recollections of the Union bombardment, the evacuation of the city, the looting of his store, and the influx of Yankee forces are riveting.

Sam was a Unionist until 1860, when his sentiments shifted in favor of the Confederacy. However, as he wrote in early 1862, he had "no ambition to acquire military renown and glory." Likewise, Sam chafed at financial setbacks caused by the war and at Confederate policies that seemed to limit his freedom. Such conflicted attitudes come through even as Sam writes about civic celebrations, benefit concerts, and the chaotic optimism of life in a strategically critical rebel stronghold. He also reflects with soberness on hospitals filled with wounded soldiers, the threat of epidemics, inflation, and food shortages. A man of deep faith who liked to attend churches all over town, Sam often comments on Atlanta's religious life and grounds his defense of slavery and secession in the Bible. Sam owned and rented slaves, and his diary is a window into race relations at a time when the end of slavery was no longer unthinkable.

Perhaps most important, the diary conveys the tenor of Sam's family life. Both Sam and his wife, Sallie, came from families divided politically and geographically by war. They feared for their children's health and mourned for relatives wounded and killed in battle. The figures in Sam Richards's Civil War Diary emerge as real people; the intimate experience of the Civil War home front is conveyed with great power.