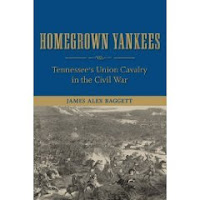 From the publisher:
Of all the states in the Confederacy, Tennessee was the most sectionally divided. East Tennesseans opposed secession at the ballot box in1861, petitioned unsuccessfully for separate statehood, resisted the Confederate government, enlisted in Union militias, elected U.S. congressmen, and fled as refugees into Kentucky. These refugees formed Tennessee's first Union cavalry regiments during early 1862, followed shortly thereafter by others organized in Union-occupied Middle and West Tennessee. In Homegrown Yankees, the first book-length study of Union cavalry from a Confederate state, James Alex Baggett tells the remarkable story of Tennessee's loyal mounted regiments.

Fourteen mounted regiments that fought primarily within the boundaries of the state and eight local units made up Tennessee's Union cavalry. Young, nonslaveholding farmers who opposed secession, the Confederacy, and the war--from isolated villages east of Knoxville, the Cumberland Mountains, or the Tennessee River counties in the west-- filled the ranks. Most Tennesseans denounced these local bluecoats as renegades, turncoats, and Tories; accused them of betraying their people, their section, and their race; and held them in greater contempt than soldiers from the North.

Though these homegrown Yankees participated in many battles--including those in Stones River, Tullahoma, Chickamauga, East Tennessee, Nashville, and Atlanta campaigns--their story provides rare insights into what occurred between the battles. For them, military action primarily meant almost endless skirmishing with partisans, guerrillas, and bushwackers, as well as with the Rebel raiders of John Hunt Morgan, Joseph Wheeler, and Nathan Bedford Forrest, who frequently recruited and supplied themselves from behind enemy lines. They scouted and foraged the countryside, guarded outposts and railroads, acted as couriers, supported the flanks of infantry, and raided the enemy. On occasion, especially during the Nashville campaign, they provided rapid pursuit of Confederate forces. They also helped protect fellow unionists from an aggressive pro-Confederate insurgency after 1862.

Baggett vividly describes the deprivation, sickness, and loneliness of cavalrymen living on the war's periphery and traces how circumstances beyond their control--such as terrain, transport, equipage, weaponry, public sentiment, and military policy--impacted their lives. He also explores their well-earned reputation for plundering-- misdeeds motivated by revenge, resentment, a lack of discipline, and the hard war policy of the Union army.

In the never-before-told story of these cavalrymen, Homegrown Yankees offers new insights into an unexplored facet of southern Unionism and provides an exciting new perspective on the Civil War in Tennessee.