The Civil War on the River Lines of Virginia, 1862-1864: Decision on the Rappahannock and the Rapidan Rivers 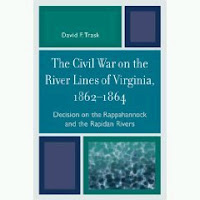 From the publisher:
In The Civil War on the River Lines of Virginia, 1862-1864, Trask argues that the bloody engagements on the river lines were the most important battles of the Civil War in the East, far surpassing even the dramatic contests at Antietam and Gettysburg in significance.

During the Civil War, the Union and the Confederacy fought for possession of the land between Culpeper Court House and Fredericksburg in east-central Virginia from December 1862 to May 1864, waging four great battles at Fredericksburg, Chancellorsville, the Wilderness, and Spotsylvania Court House. The Rappahannock and Rapidan Rivers flowed through the area. It was the only defensible stronghold between Washington, D.C. and Richmond, the capitals of the belligerent nations. Its loss would doom the Southern cause in Virginia. When the army of General Ulysses S. Grant finally evicted General Robert E. Lee's troops from the river lines, he soon marched to the James River and lay siege to Petersburg and Richmond. Eventually, Grant achieved the final victory of the union in the eastern theater of war. This book is the first to analyze and evaluate all of the struggles on the river lines in one book.

Author David F. Trask holds a Ph.D. in history from Harvard University (1958). He taught history at several colleges and universities, including Wesleyan University, the University of Nebraska (Lincoln), and SUNY at Stony Brook. He served as the Director of the Office of the Historian, U.S. Department of State (1976-1981) and the Chief Historian of the United States Army Center of Military History (1981-1988). He is the author or editor of five works on World War I, The War with Spain in 1898 (1981), the leading study of the subject; Victory Without Peace: American Foreign Relations in the Twentieth Century (1968); a co-compiler of two major bibliographies; co-author of a textbook on American foreign relations; and author of numerous articles and essays. He was a member of the National Historical Publications and Records Commission (1976-1981) and the president of the Society for History in the federal government (1981-1982).