Like a Meteor Burning Brightly: The Short but Controversial Life of Colonel Ulric Dahlgren 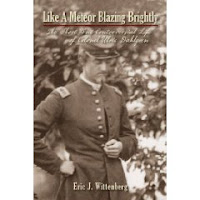 From the publisher:
The only biography on Ulric Dahlgren, a brilliant, ambitious young man who became the youngest full colonel in the United States Army at the age of 21 yet died before his 22nd birthday, this account chronicles his full life story.

Offering evidence of Dahlgren’s ties to Abraham Lincoln, this extensively researched record addresses the theory that Lincoln authorized the kidnapping and assassination of the entire Confederate cabinet, including President Jefferson Davis.

Looking at the notorious Dahlgren Affair within the context of the Dahlgren’s entire life, this examination provides insight into a unique individual’s past as well as an unclear incidence in American history.

Eric J. Wittenberg is an attorney and a Civil War historian who has contributed to America's Civil War, Blue & Gray, and North & South. He is the coauthor of One Continuous Fight and Plenty of Blame to Go Around and the author of Glory Enough for All, Protecting the Flank, and The Union Cavalry Comes of Age. He lives in Columbus, Ohio.