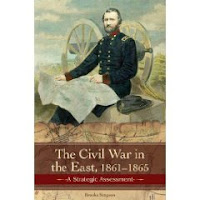 From the publisher:
For all the literature about Civil War military operations and leadership, precious little has been written about strategy, particularly in what has become known as the eastern theater. Yet, it is in this theater that the interaction of geography and logistics, politics and public opinion, battle front and home front, and the conduct of military operations and civil-military relations, can be highlighted in sharp relief.

With a fresh perspective, Brooks Simpson offers an integrated interpretation of military operations and shows how politics, public perception, geography, and logistics shaped the course of military operations in the East. Brooks details how the eastern theater was a theater of decision (and indecision) because people believed that it was: the presence of the capitals raised the stakes of victory and defeat. At a time when people viewed war in terms of decisive battles, the anticipation of victory followed by disappointment and persistent strategic stalemate.

At a time when the telling and retelling of the military narrative approaches Norse saga, Brooks avers that it is essential to question conventional wisdom, especially when it is questionable wisdom, without giving way to pure contrarianism.

BROOKS SIMPSON is Professor of History at Arizona State University and the author of six books on the Civil War, including Let Us Have Peace: Ulysses S. Grant and the Politics of War and Reconstruction, 1861-1868; America's Civil War; and The Political Education of Henry Adams.