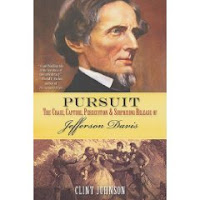 From the publisher:
"A Spellbinding Tale Of The Last Days Of The Confederacy." —David J. Eicher, author of The Longest Night

In the only book to tell the definitive story of Confederate President Jefferson Davis's chase, capture, imprisonment, and release, journalist and Civil War writer Clint Johnson paints a riveting portrait of one of American history's most complex and enduring figures.

Fascinated by the American Civil War since the fourth grade, Clint Johnson has written eight books on the subject, including the acclaimed Civil War Blunders. Originally from Florida, he counts Confederate soldiers from Florida, Georgia, and Alabama among his ancestors. He is active as a Civil War reenactor and has portrayed soldiers from both the South and the Union. In researching Pursuit, he spent months studying letters, diaries, and the Official Records of the War of the Rebellion. A graduate of the University of Florida with a degree in journalism, he lives in the mountains of North Carolina with his wife, Barbara.