What Reconstruction Meant: Historical Memory and the American South 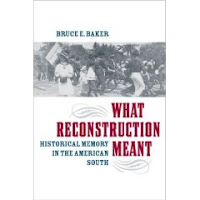 From the publisher:
A great deal has been written about southern memory centering on the Civil War, particularly the view of the war as a valiant lost cause. In this challenging new book Bruce Baker looks at a related, and equally important, aspect of southern memory that has been treated by historians only in passing: Reconstruction. What Reconstruction Meant examines what both white and black South Carolinians thought about the history of Reconstruction and how it shaped the way they lived their lives in the first half of the twentieth century.

Baker addresses the dominant white construct of "the dark days of Reconstruction," which was instrumental both in ending Reconstruction and in justifying Jim Crow and the disfranchisement of African Americans in the South, setting the tone for early historians' accounts of Reconstruction. Looking back on the same era, African Americans and their supporters recalled a time of potential and of rights to be regained, inspiring their continuing struggles to change the South.

Baker draws on a tremendous range of newspapers, memoirs, correspondence, and published materials, to show the intricate process by which the white-supremacist memory of Reconstruction became important in the 1890s, as segregation and disenfranchisement took hold in the South, and how it began to crumble as the civil rights movement gained momentum. Examining the southern memory of Reconstruction, in all its forms, is an essential element in understanding the society and politics of the twentieth-century South.

Bruce E. Baker is Lecturer in U.S. History at the University of London. His essays have appeared in numerous publications, including most recently The South Carolina Encyclopedia and Radicalism in the South since Reconstruction.