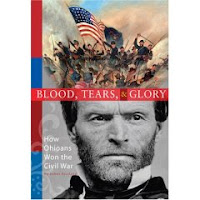 From the publisher:
It's the greatest untold story of the Civil War ... and one of the newest.

For 150 years, the battlefields of Virginia, Gettysburg, and Antietam were what Americans thought of first when they thought of the Civil War. Wrong. While Easterners were battling to a bloody stalemate, Midwestern farmers, shopkeepers, and country lawyers fighting elsewhere were shaping the war's outcome. Dismissed by haughty Easterners as "armed rabble" or "drunkards," these citizen-soldiers, white and black, often were poorly trained and poorly equipped--but they were tough, confident, and supported by strong women who found their own ways to get into the fight. And the Midwesterners included most of the Union's top generals. From brilliant, if flawed, commanders to feisty enlisted men who were hard to discipline but hard to scare, Blood, Tears, & Glory tells powerful stories of the war, many for the first time, and all from a new point of view.

From CWBN:
The exact day of release for this October title was unknown at the time of posting. We have since learned that it is October 16.