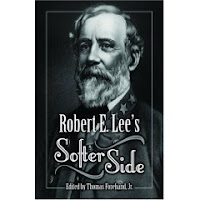 From the publisher:
A collection of anecdotes and quotes displaying Lee's tender side. Though at times he was known to have a "fierce and violent temper," Lee nonetheless had a heart that editor Thomas Forehand contests was "as soft as velvet."

Through letters, diary excerpts, and touching stories, Forehand demonstrates that in his personal life Lee was indeed a peacemaker, full of a surprisingly sensitive and gentle nature that his family and others recorded. One cadet's mother wrote in her diary that Lee was "very human, kind, and calm," and Lee's letters home to his wife and children illuminate the man behind the legend.

After reading Stanley F. Horn's "The Robert E. Lee Reader" in the 1990s, Mr. Forehand's reading, research, and writing became solely focused on the famous general. Since the summer of 2001, he has been portraying Robert E. Lee at Sons of Confederate Veterans camps, historical societies, United Daughters of the Confederacy chapters, and other historically interested groups. In 2004 he was granted the Robert E. Lee Award from the Tennessee Division of the Sons of Confederate Veterans for his authentic portrayals.

After spending most of his life in the field of public and religious education, Mr. Forehand is now a civil servant. When not researching or portraying the "Marble Man," he enjoys exercising and spending time with his family.