Dixie Betrayed: How the South Really Lost the Civil War 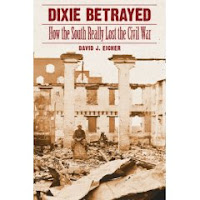 From the publisher:
For more than a century, since the end of the Civil War, the conventional wisdom has been that the South lost because of overwhelming Union strength and bad luck. The politicians and generals on the Confederate side have been lionzed as noble warriors who bravely fought for an honorable cause that had little chance of succeeding. But in Dixie Betrayed, historian David J. Eicher reveals for the first time the real story, a calamity of political conspiracy, discord, and dysfunction that cost the South the Civil War.