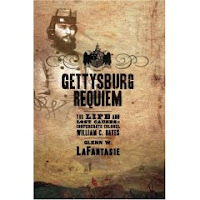 From the publisher:
William C. Oates is best remembered as the Confederate officer defeated at Gettysburg's Little Round Top, losing a golden opportunity to turn the Union's flank and win the battle--and perhaps the war. Now, Glenn W. LaFantasie--bestselling author of Twilight at Little Round Top--has written a gripping biography of Oates.

Oates was no moonlight-and-magnolias Southerner, as LaFantasie shows. Raised in the hard-scrabble Wiregrass Country of Alabama, he ran away from home as a teenager, roamed through Louisiana and Texas--where he took up card sharking--and finally returned to Alabama, to pull himself up by his bootstraps and become a respected attorney. During the war, he rose to the rank of colonel, served under Stonewall Jackson and Lee, was wounded six times and lost an arm. Returning home, he launched a successful political career, becoming a seven-term congressman and ultimately governor. LaFantasie shows how, for Oates, the war never really ended--he remained devoted to the Lost Cause, and spent the rest of his life waging the political battles of Reconstruction.

Here then is a richly evocative story of Southern life before, during, and after the Civil War, based on first-time and exclusive access of family papers and never-before-seen archives.

Glenn W. LaFantasie is the Frockt Family Professor of Civil War History and the Director of the Center for the Civil War in the West at Western Kentucky University. He is the bestselling author of Twilight at Little Round Top. He has also written for several magazines and newspapers, including American History, North & South, MHQ: The Quarterly Journal of Military History, The New York Times Book Review, America's Civil War, Civil War Times Illustrated, and The Providence Journal.

From the critics:
"Exhaustively researched and elegantly written, this captivating biography is a signal contribution to Civil War historiography.... In LaFantasie's penetrating analysis, Oates becomes the avatar of everything both objectionable and laudable in the antebellum and postwar South as well as in the intervening Civil War." - Library Journal

LaFantasie's thorough scholarship and ability to marshal facts in readable prose means that the book will especially reward students of the Confederacy's "middle management"--the local entrepreneurs who became field-grade officers. A valuable addition to the Civil War shelves. - Booklist