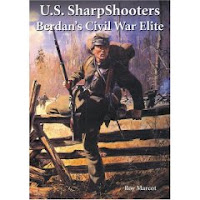 From the publisher:
This detailed and beautifully illustrated book tells the story of Col. Hiram Berdan's brilliant conception: the U.S. SharpShooters, a specialized 2-regiment unit of marksmen recruited from the farming and backwoods communities of the North. Known for their distinctive green uniforms, Sharps breech-loading rifles, and risky tactics, the SharpShooters fought at battles such as the Peninsula, Chancellorsville, Gettysburg, and the Wilderness.

The book covers their training, tactics, and weapons and is a must-have for Civil War enthusiasts and anyone interested in the history of special forces. Features paintings by acclaimed Civil War artist Don Troiani.

Roy Marcot has written several books, including Remington: America s Oldest Gunmaker , The History of Remington Firearms, and Hiram Berdan: Chief of SharpShooters. He is a member of the American Society of Arms Collectors.