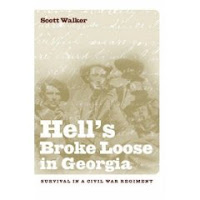 From the publisher:
A new kind of regimental history that reveals soldiers’ inner struggles and longings

"Darling, I never wanted to gow home as bad in my life as I doo now and if they don’t give mee a furlow I am going any how." Written in December 1862 by Private Wright Vinson in Tennessee to his wife, Christiana, in Georgia, these lines go to the heart of why Scott Walker wrote this history of the Fifty-seventh Georgia Infantry, a unit of the famed Mercer’s Brigade.

All but a few members of the Fifty-seventh lived within a close radius of eighty miles from each other. More than just an account of their military engagements, this is a collective biography of a close-knit group. Relatives and neighbors served and died side by side in the Fifty-seventh, and Walker excels at showing how family ties, friendships, and other intimate dynamics played out in wartime settings. Humane but not sentimental, the history abounds in episodes of real feeling: a starving soldier’s theft of a pie; another’s open confession, in a letter to his wife, that he may desert; a slave’s travails as a camp orderly.

Drawing on memoirs and a trove of unpublished letters and diaries, Walker follows the soldiers of the Fifty-seventh as they push far into Unionist Kentucky, starve at the siege of Vicksburg, guard Union prisoners at the Andersonville stockade, defend Atlanta from Sherman, and more. Hardened fighters who would wish hell on an incompetent superior but break down at the sight of a dying Yankee, these are real people, as rarely seen in other Civil War histories.

Scott Walker is the pastor of First Baptist Church of Waco, Texas, the author of nine books, and an adjunct professor at Baylor University.

"The letters, diaries, and other information Scott Walker located and utilized on the soldiers and families of the 57th Georgia infantry are among the finest I've ever encountered. He has done complete justice to these superb primary sources by writing a narrative that is richly descriptive yet focused and restrained. Walker allows the soldiers and their families to speak for themselves while placing their words and deeds in a clear and meaningful context." — T. Michael Parrish, Linden G. Bowers Professor of American History, Baylor University, author of Richard Taylor and editor of Brothers In Gray

"Civil War regimental histories are thick on the ground now, but Hell's Broke Loose in Georgia is a different sort of creature, a penetrating look at the inner world and lives of men who marched, ate, slept, fought, and died together. Not so much a unit history as a 'family' portrait of men bound by the war, Scott Walker's book offers a glimpse of the personality and inner world of almost all Civil War units, North and South alike. This is the part of regimental history that too many regimental historians overlook." —William C. Davis, Director of Programs, Virginia Center for Civil War Studies, Virginia Tech, and author of Look Away! and Jefferson Davis

"Scott Walker has produced history that is at the same time very old and quite new. He relies upon a rich trove of letters and diaries to focus his narrative upon the coming-of-age experiences and vivid observations of men and boys who served in the Fifty-seventh Georgia Infantry Regiment. Walker also offers a species of the 'new' military history—a drama set in blood and mud instead of command posts in which common soldiers instead of generals are the principal characters. This is an excellent book." — Emory M. Thomas, Regent's Professor of History, University of Georgia, and author of Robert E. Lee and The Confederate Nation