The Horrid Pit: The Battle of the Crater, the Civil War's Cruelest Mission 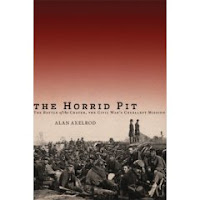 From the publisher:
The story of one of the most violent yet least-known episodes of the Civil War — the daring excavation of the longest military tunnel in history.

From Publishers Weekly:
One of the American Civil War's most horrific events took place on July 30, 1864: the slaughter of thousands of Union troops, including many African-Americans, in a giant pit outside Petersburg, Va.

The pit was created as a result of a poorly planned and executed Union mission to tunnel under Confederate lines and blow a hole in them, thereby opening the gates to a full frontal assault on Petersburg that, if successful, could have helped decide the war. Instead, after several hundred Confederates perished in the initial mine explosion, the Union troops entered the crater—later known as The Pit—and were gunned down. (The scene is re-created in the novel and film Cold Mountain.)

Civil War specialist Axelrod (The War Between the Spies, et al.) offers a concise, readable and creditable recounting of the Battle of the Crater, which U.S. Grant famously termed a stupendous failure. When the dust settled, the Union forces, under the inept leadership of generals Ambrose E. Burnside and George Gordon Meade, suffered more than 4,000 killed, wounded or captured. The well-led Confederates had about 1,500 casualties. The massive slaughter does not make for easy reading, but is a reminder of the horror of war at its basest level.