115th New York in the Civil War: A Regimental History 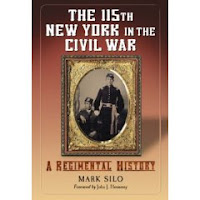 From the publisher:
This is the full story of the 115th New York, a unit with a unique history among Union Civil War regiments. Only two weeks after leaving home, the unit surrendered at Harpers Ferry in 1862. Sent to serve out its parole in Camp Douglas, Chicago, the regiment was convicted for burning its barracks and subsequently banished to Hilton Head, South Carolina. Later absolved, the unit fought at Olustee, the Bermuda Hundred Campaign, Cold Harbor, The Battle of the Crater, and Fort Fisher, earning a place among Fox's fighting 300 union regiments, a distinction based on casualty counts. The 115th fought alongside African-American units and witnessed the liberation of thousands of slaves and captured Union soldiers. Appendices provide a chronology and regimental roster.