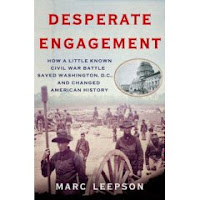 From Publishers Weekly:
How small can a Civil War battle be and still claim the mantle of war-changing decisiveness? That proposition is tested in this engaging account of the 1864 Battle of Monocacy Junction, in which some 16,000 Confederate troops trounced 5,800 bluecoats on a Maryland field. Not a surprising outcome, but Leepson contends that Union Gen. Lew Wallace's doomed stand held up Confederate Gen. Jubal Early's surprise lunge at Washington, D.C.—which was held only by a hapless force of invalids, militia and government clerks—by one crucial day. The result was a photo finish, with Union reinforcements arriving in the nick of time to save the capital from capture (hence the decisiveness).

Leepson lucidly narrates the campaign, adding color commentary about Early's panoply of abhorrent personal traits and the incompetence, apathy and possible drunkenness that prevailed among Union commanders, along with plenty of vignettes of the horror and pathos of war. He also debunks the campaign's premier anecdote, which has Lincoln coming under rebel fire while looking out from Washington's ramparts (true, he finds) and getting chewed out — Get down, you fool — by a young Capt. Oliver Wendell Holmes Jr. (false). Gettysburg it ain't, but it's still a hard-fought, dramatic episode that Leepson brings vividly to life.