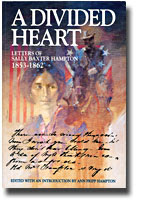 Hampton left a small collection of letters to her New York relations that are both informative and entertaining. In a clear and uninhibited style, she tells the poignant story of her short life as she reports on social events and plantation life and records her observations on local politics and the impending Civil War.

"What these letters do . . . is authenticate and corroborate a vertically cut and frozen vision into the past, when neither wealth, nor status, nor will could prevail over events." — Journal of Southern History

"These forty-seven letter are still important because of Sally's particular identity and because they add yet another dimension to the role of women during the Civil War. Best of all, A Divided Heart is delightfully entertaining." — North Carolina Historical Review

"The book will help provide a realistic understanding of Southern society during the Civil War years." — Augusta Chronicle

From CWBN:
The exact day of release for this June title is uknown.