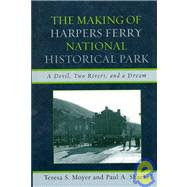 by Teresa Moyer and Paul Shackel

From the publisher:
Harpers Ferry National Historical Park is most widely known today for the attempted slave revolt led by John Brown in 1859, the nucleus for the interpretation of the current national park. Here, Moyer and Shackel tell the behind-the-scenes story of how this event was chosen and preserved for commemoration, providing lessons for federal, state, local and non-profit organizations who continually struggle over the dilemma about which past to present to the public. Professional and non-professional audiences alike will benefit from their important insights into how federal agencies interpret the past, and in turn shape public memory.

Paul A. Shackel is Professor of Anthropology at the University of Maryland and is Director of the Center for Heritage Resource Studies. He received his Ph.D. from the State University of New York at Buffalo in 1987 and has been teaching at the University of Maryland since 1997. Previously, he was employed as an archaeologist at Harpers Ferry National Historical Park. He has written and edited a number of books, including Memory in Black and White: Race, Commemoration, and the Post-Bellum Landscape (AltaMira, 2003) and Archaeology as a Tool of Civic Engagement (AltaMira, 2007).

Teresa S. Moyer is a research assistant in the Department of Anthropology at the University of Maryland at College Park, where she received her MAA in 2002. She is currently a PhD candidate in American Studies. She has conducted projects for the Smithsonian Institution, the National Park Service, and several local history organizations in public outreach and education.

"Harpers Ferry is, to my mind, one of the most compelling historic sites in the nation. There are so many histories living in layer after layer of this place. Teresa S. Moyer and Paul A. Shackel excavate them in all their exquisite complexity, offering a model biography of a historic site. "—Edward T. Linenthal, editor, Journal of American History

"This is the kind of thoughtful and provoking study of shifting policy and practice that every historic site needs. Moyer and Shackel have probed beneath the surface to analyze the changing treatment and presentation over time of a complex historic place at the confluence of two majestic rivers where events occurred that propelled Americans toward the Civil War."—Richard West Sellars, author of Preserving Nature in the National Parks: A History

"How is history preserved, presented, and commemorated? In this book, Moyer and Shackel give us rare insight into the process of how a national park gets made. In the process we learn how the conflicting goals and differing perceptions of various stakeholders can cause the past to be changed over time. This is a superb example of multidisciplinary research at its finest, told with conviction and feeling. It's destined to become a standard text in classroom and field, and hopefully also in the halls of power. Those of us concerned about our vanishing cultural heritage need more books like this one."—Charles E. Orser, Jr., Distinguished Professor, Illinois State University

"One of the finest park histories that I've read--thoughtful , original, fluidly written, yet meticulously researched. By juxtaposing three intertwined stories--history, archeology, and interpretation--Moyer and Schakel explain how the quest for historical authenticity can give way to he creation of a fantastical parkscape. A superb case study on how "history makes itself" and a model for future park histories. "—R. Bruce Craig, former executive director, National Coalition for History

"More than just a meticulously researched account of the creation of an iconic American park, the authors present a human story of contested meanings, good intentions, and power politics. Why did the National Park Service demolish most of the 19th-century architecture in Harpers Ferry? Who claimed that John Brown was a lunatic? And why was one of the first of the park's historians relegated to cleaning restrooms? Read on."—Adrian Praetzellis, professor of anthropology, Sonoma State University, and author of Dug to Death

"Teresa S. Moyer and Paul A. Shackel help us analyze the historical reality of Harpers Ferry National Historical Park through their careful examination of the National Park Service's restoration and interpretation of this historically important place. In so doing, they emphasize two topics shared by most historic sites: restoration philosophy and multiple histories."—Dwight Pitcaithley, from the Foreword