Civil War and the Indian Wars 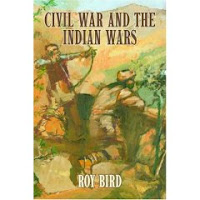 From the publisher:
This fascinating and brief history looks at how the Civil War impacted Indian tribes in the Western United States from California to the Mississippi River. With a chapter for each year of the Civil War, it examines a prewar incident that sparked an Apache war in New Mexico and Arizona, moves on to the Navajo war that concluded in 1864, and ends with skirmishes and raids throughout the Midwest in 1865.

Historian, fiction writer, professor, and Civil War scholar Roy Bird wrote his first article as a senior in college and his first book two years later. Born in Herington, Kansas, Bird graduated from Kansas State University with a bachelor's and master's degree in history. He then went on to Emporia State University, where he received his master's in library science. He has worked for many colleges and libraries throughout Kansas and has been a freelance writer since 1974.

Bird is largely known in historical, library, educational, and writers' circles in Kansas, having written many books and over 200 articles, stories, and reviews. His work and research is regularly quoted in a number of publications as factual and pertinent information. He has spoken to library groups, historical organizations, public schools, and writers' groups at local and national levels. He is also a regular contributor to America's Civil War and Military History and has his own monthly book-review column in Kansas Libraries.

From CWBN:
This title was released on August 15.