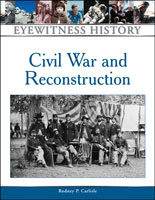 From the publisher:
The Civil War is considered the most devastating war in the history of the United States in terms of the number of Americans killed and wounded. In addition to the tremendous loss of life, a young nation and its residents were left to rebuild and reconsider the problems that led them to war in the first place. Through the period of Reconstruction that followed the Civil War, the United States emerged from a loose and fragile confederation of sovereign states to a single nation with greatly enhanced federal powers. The Civil War was a central turning point in the history of our country, as it helped bring the institution of slavery to an end and set the stage for the battle for civil rights.

Civil War and Reconstruction, a brand-new volume in Facts On File's acclaimed Eyewitness History series, focuses on the American experience of the Civil War, with hundreds of firsthand accounts of this period—from diary entries and letters to speeches and newspaper articles—illustrating how historical events appeared to those who lived through them. Among the eyewitness testimonies included are those of such prominent individuals as Abraham Lincoln, Frederick Douglass, and Clara Barton, as well as numerous men and women on both sides of the conflict who left records of their experiences during this time. Each chapter contains a narrative section and a chronology of events. Appendixes provide concise biographies of 50 influential individuals such as John Brown, Harriet Tubman, and Jefferson Davis; primary documents—either full text or excerpts—including the Fugitive Slave Act, the Emancipation Proclamation, the Gettysburg Address, and the Thirteenth, Fourteenth, and Fifteenth Constitutional Amendments; maps; notes; a thorough bibliography; and an index. More than 110 black-and-white images enhance the text, portraying military battles, political and military leaders, important locations, and scenes from everyday life.

Rodney P. Carlisle holds a B.A. in history from Harvard University and both an M.A. and Ph.D. in history from the University of California, Berkeley. He is a former chair of the history department at Rutgers University in Camden, New Jersey, where he specialized in 20th-century history, with a concentration in military history. Carlisle is now professor emeritus there. He has written many articles and books on history. For Facts On File, he has written World War I in the Eyewitness History series and The Thirties in the Day by Day series.