Irish Americans in the Confederate Army 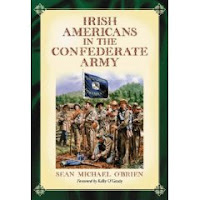 From the publisher:
In 1861, Americans on both sides flooded to enlist for what all thought would be a short and glorious war. Anxious to prove their loyalty to their new homeland, thousands of America's Irish immigrant population were among those who hurried to join the fight on both sides. While the efforts of the Union's legendary Irish Brigade are well documented, little has been said regarding the role Irish American soldiers played for the Confederacy. This comprehensive history explores the Irish contribution to the Confederate military effort throughout the four major combat theatres of the Civil War.

Beginning with an overview of Irish Americans in the South, the book looks at the Irish immigrant experience and the character of the typical Irish Confederate soldier, detailing the ways in which Irish communities supported the Southern war effort. The main focus is the military actions in which Irish American soldiers were present in significant or influential numbers. With a combat death rate disproportionate to their numbers, the 40,000 Irish who served in the Confederate army played significant roles in the Army of Northern Virginia, the Army of Tennessee, the hotly disputed coastal areas and the Mississippi and Trans-Mississippi campaigns. Most major battles of the war are discussed including Manassas, Sharpsburg, Gettysburg, Shiloh, Murfreesboro and Appomattox. Appendices contain a list of various Irish commands and field commanders in the Confederate Army.

From CWBN:
This title shows a general "August" release date from B&N and a July 27 date from Amazon.