Great Commanders Head to Head: The Battles of the Civil War 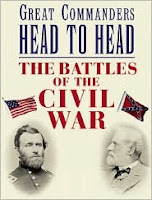 From the publisher:
There have been many books written about the Civil War, but none have captured the bloody battles quite like Great Commanders Head to Head. Discover what drove Ulysses S. Grant and other great Civil War leaders on and off the battlefield, and how their victories and losses shaped the war—and America. Each chapter examines a decisive battle between a pair of imposing adversaries, featuring some of the greatest American commanders in battle: Lee vs. McClellan on the blood-soaked fields of Antietam, Beauregard vs. McDowell at First Manassas, and Sherman vs. Hood in the March to the Sea. Each head-to-head battle includes a contextual introduction, a description of the action, and an analysis of the aftermath. Military experts share their insights into the strategies of each commander. Specially commissioned, full-color maps depict an overhead view of featured battles, including the Battle of Gettysburg in 1863. Conflicts are described as they happened, with insightful annotations and color-coded symbols to show the movement of opposing forces. Special box features showcase opposing commanders’ strengths and weaknesses, and offer analysis as to why one triumphed on the battlefield while the other failed.