The Civil War at Perryville: Battling for the Bluegrass 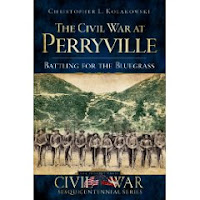 From the publisher:
Desperate to seize control of Kentucky, the Confederate army launched an invasion into the commonwealth in the fall of 1862, viciously culminating at an otherwise quite Bluegrass crossroads and forever altering the landscape of the war. The Battle lasted just one day yet produced nearly eight thousand combined casualties and losses, and some say nary a victor. The Rebel army was forced to retreat, and United States kept its imperative grasp on Kentucky throughout the war.

Few know this hallowed ground like Christopher L. Kolakowski, former director of the Perryville Battlefield Preservation Association, who draws on letters, reports, memoirs and other primary sources to offer the most accessible and engaging account of the Kentucky campaign yet, featuring over sixty historic images and maps.