The 151st Pennsylvania Volunteers at Gettysburg: Like Ripe Apples in a Storm 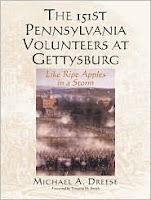 by Michael A. Dreese

From the publisher:
Dreese, president of the Friends and Descendants of the 151st Pennsylvania, describes how the relatively untried troops lost over 72% of their strength to death, wounds, or capture during the course of the battle as they fought Pettigrew's North Carolinians on July 1st and helped repulse the famous Confederate charge two days later.

Michael A. Dreese is the author of five books and numerous journal articles on topics including Pennsylvania and the American Civil War. An award-winning photographer, he is the president of the Friends and Descendants of the 151st Pennsylvania, and vice-president of the Susquehanna Civil War Round Table. He lives in Kreamer, Pennsylvania.