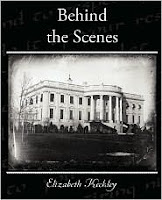 From the publisher:
Born into slavery, Elizabeth Hobbs Keckley (ca. 1824-1907) rose to a position of respect as a talented dressmaker and designer to the political elite of Washington, D.C., and a confidante of First Lady Mary Todd Lincoln. In this unusual memoir, Keckley offers a rare, behind-the-scenes view of the formal and informal networks that African Americans established among themselves, as well as an insider's perspective of the men who made Civil War politics and the women who influenced them.

Keckley's descriptions of the Lincolns at home reveal touching, unguarded moments of laughter, discussion, and affection. She witnessed the grief of both parents at the death of their son Willie and Mary Todd's prostration after the president's assassination. In dire financial straits, Mary Todd turned to Keckley, who spent several months in New York helping the former First Lady sell her elegant clothing.

President of the Contraband Relief Association and a friend of Frederick Douglass and other prominent African-American leaders, Keckley emerges as a remarkable, resourceful, and principled woman who helped mediate between black and white communities. Frances Smith Foster's introduction traces the book's reception history and fills in biographical gaps in the text.