The Civil War at Sea 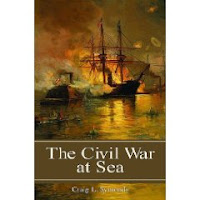 From the publisher:
From Craig Symonds, author of the 2009 Lincoln Prize award-winner Lincoln and His Admirals, comes a fascinating look at the era when American naval power came of age. Thoroughly researched and excitingly written, it brings to light a wealth of new information on a pivotal aspect of the Civil War.

The Civil War at Sea covers navies on both sides of the conflict, examining key issues such as the impact of emergent technologies, the effectiveness of the Union's ambitious strategy of blockading, the odyssey of Confederate commerce raiders, the role of naval forces on the western rivers, and the difficulty of conducting combined sea and ground operations against the major Southern port cities. For Civil War buffs, fans of military and technological history, and other interested readers, it is insightful, essential reading.