"They Have Killed Papa Dead!": The Road to Ford's Theatre, Abraham Lincoln's Murder, and the Rage for Vengeance 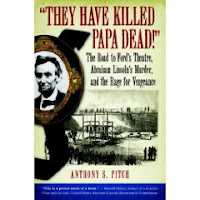 From the publisher:
The assassination of Abraham Lincoln is a central drama of the American experience. Its impact is felt to this day, and the basic story is known to all. Anthony Pitch’s thrilling account of the Lincoln conspiracy and its aftermath transcends the mere facts of that awful night during which dashing actor John Wilkes Booth shot Lincoln in the head and would-be assassin Lewis Payne butchered Secretary of State William Seward in the bed of his own home. “They Have Killed Papa Dead!” transports the reader to one of the most breathtaking moments in history, and reveals much that is new about the stories, passions, and times of those who shaped this great tragedy.
Virtually every word of Anthony Pitch’s account is based on primary source material: new quotes from previously unpublished diaries, letters and journals – authentic contemporary voices writing with freshness and clarity as eyewitnesses or intimate participants – new images, a new vision and understanding of one of America’s defining moments. With an unwavering fidelity to historical accuracy, Pitch provides new confirmation of threats against the president-elect’s life as he traveled to Washington by train for his first inauguration, and a vivid personal account of John Wilkes Booth being physically restrained from approaching Lincoln at his second inauguration. Perhaps most chillingly, new details come to light about conditions in the special prison where the civilian conspirators accused of participating in the Lincoln assassination endured tortuous conditions in extreme isolation and deprivation, hooded and shackled, before and even during their military trial. Pitch masterfully synthesizes the findings of his prodigious research into a tight, gripping narrative that adds important new insights to our national story.