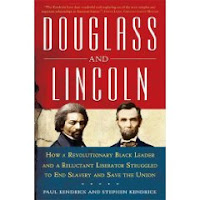 From the publisher:
This book charts the influence Frederick Douglass and Abraham Lincoln had on each other and on the nation altered the course of slavery and the outcome of the Civil War.

Although Abraham Lincoln deeply opposed the existence of slavery, he saw his mission throughout much of the Civil War as preserving the Union, with or without slavery. Frederick Douglass, a former slave, passionately believed the war’s central mission to be the total abolition of slavery. During their meetings between 1863 and 1865, and through reading each other’s speeches and letters, they managed to forge a strong, mutual understanding and respect that helped convince Lincoln the war could not be truly won without black soldiers and permanent emancipation.