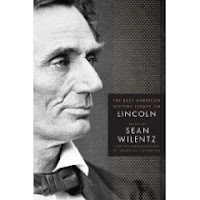 by the Organization of American Historians, Sean Wilentz (Editor)

From the publisher:
This new volume in the Best American History Essays series brings together classic writing from top American historians on one of our greatest presidents. Ranging from incisive assessments of his political leadership, to explorations of his enigmatic character, to reflections on the mythos that has become inseparable from the man, each of these contributions expands our understanding of Abraham Lincoln and shows why he has been such an object of enduring fascination. Contributions include: James McPherson on Lincoln the military strategist; Richard Hofstadter on the Lincoln legend; Edmund Wilson on his contribution to American letters; John Hope Franklin on the Emancipation Proclamation; James Horton on Lincoln and race; David M. Potter on the secession; Richard Current on Lincoln's political genius; Mark Neely on Lincoln and civil liberties.