On to Atlanta: The Civil War Diaries of John Hill Ferguson, Illinois Tenth Regiment of Volunteers 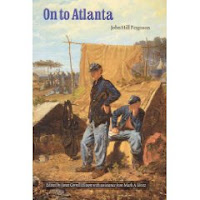 From the publisher:
Historians have shown us the drama and sweep of the swathe Sherman's March cut through the South. Officers have bequeathed us accounts of what happened in strategic and practical terms. But for a gritty, day-by-day, on-the-ground view of what the march to Atlanta meant to the common soldier, nothing can compare to the diary of an enlisted man like John Hill Ferguson.

A Scottish immigrant and a U.S. citizen since 1856, Ferguson enlisted in the Illinois Veteran Volunteers in 1860 and shortly afterward began to keep a diary. The annotated entries presented here, from 1864 and 1865, describe life in the Tenth Illinois as the troops made their way through the Carolinas and Georgia under Sherman. In these pages the details of Civil War soldiering become real, immediate, and personal, as do the daily dramas of life on the march. Smallpox struck Ferguson's unit early on, decimating his company; food, when there was any, was invariably poor; and always Confederate defenders waited up ahead, exacting a heavy toll on the advancing Northerners. These events and details, conveyed with all the force of Ferguson's fine intellect and superior powers of observation, offer an unforgettable firsthand view of that savage contest.