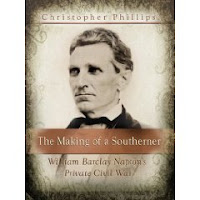 From the publisher:
William B. Napton was an editor, lawyer, and state supreme court justice who lived in Missouri during the tumultuous American nineteenth century. The highly educated former New Jerseyite became the owner or trustee of nearly fifty slaves and a proslavery ideologue. His story offers insights into the process of southernization, one driven more by sectional ideology and politics than by elements of a distinctive southern culture.

Napton s southern evolution was only completed after he had constructed a politicized memory of the Civil War. By suffering for the South, he claimed by right what he could not by birth. Napton became a southerner by choice.

Christopher Phillips is Professor of History at the University of Cincinnati. He is the author of four previous books, including Missouri s Confederate: Claiborne Fox Jackson and the Creation of Southern Identity in the Border West and coeditor of The Union on Trial: The Political Journals of Judge William Barclay Napton, 1829 1883, both available from the University of Missouri Press.