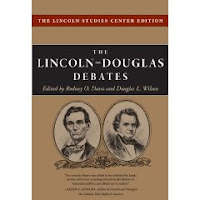 From the publisher:
While the debates between Abraham Lincoln and Stephen A. Douglas are undoubtedly the most celebrated in American history, they may also be the most consequential as well. For the issues so fiercely debated in 1858 were about various interrelated aspects of one momentous, nation-threatening issue: slavery. The contest between Lincoln and Douglas became a testing ground for the viability of conflicting ideals in a nation deeply divided. One of the most colorful and engaging episodes in American history, this series of debates is of enduring interest as an illuminating instance of the ever-recurring dilemma of self-government: what happens when the guiding principle of democracy, "popular sovereignty," confronts a principled stand against a "moral, social, and political evil"? The tragic answer in this case came three years later: civil war.

Important as they are, the Lincoln-Douglas debates have long since ceased to be self-explanatory. This edition is the first to provide a text founded on all known records, rather than following one or another of the partisan and sometimes widely-varying newspaper accounts. Meticulously edited and annotated, it provides numerous aids to help the modern reader understand the debates, including extensive introductory material, commentary, and a glossary. The fullest and most dependable edition of the Lincoln-Douglas debates ever prepared, this edition brings readers as close as possible to the original words of these two remarkable men.