Cobb's Legion Cavalry: A History and Roster of the Ninth Georgia Volunteers in the Civil War 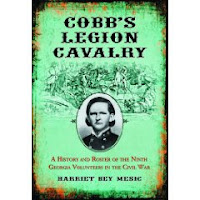 From the publisher:
"The best regiment of either army, North or South"-this was the description of Cobb's Legion offered by General Wade Hampton during the Civil War. This large and extremely experienced unit played a crucial role for the South throughout the war. This book offers a history of their actions in more than 100 battles and skirmishes over the course of the war. Additionally, biographies of the officers and the nearly 1500 men of the regiment are included, as well as records of those who died, deserted, or were prisoners of war.

Harriet Bey Mesic, whose great-grandfather was part of Cobb's Legion Cavalry, edited the L.E. Beacon Newsletter for two decades and has written a book about Fredericksburg, Virginia. She lives in Charleston, South Carolina.