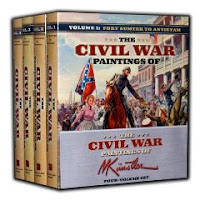 From the publisher:
For nearly twenty years, Mort Künstler has interpreted the Civil War through his paintings. As part of his research, he has turned to leading historians and scholars for information that he has then translated on canvas to create an indelible image of the war, in many ways the defining ordeal in American history.

The four volumes that make up The Civil War Paintings of Mort Künstler contains more than 650 images. Some of these images are of original sketches, others are of the works in progress, others are completed paintings, yet others are details in the paintings that are of particular interest.

MORT KUNSTLER is the reigning dean of American historical artists. No other artist has illustrated so many events in America with such authenticity and drama, from cave-dwelling Native Americans to the space program. He has had numerous one-man exhibitions at galleries such as the Hammer Galleries in New York City. He also was the subject of a one-hour special on A&E Network's Time Machine. His previous books include Images of the Civil War, Gettysburg, Jackson and Lee, and The Civil War Art of MORT KüNSTLER. He lives in Oyster Bay, New York.