The Great Comeback: How Abraham Lincoln Beat the Odds to Win the 1860 Republican Nomination 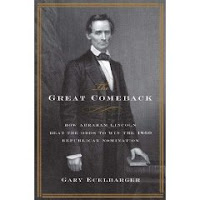 From the publisher:
In the fall of 1858, Abraham Lincoln looked to be anything but destined for greatness. Just shy of his fiftieth birthday, Lincoln was wallowing in the depths of despair following his loss to Stephen Douglas in the 1858 senatorial campaign and was taking stock in his life. The author takes us on a journey with Abraham Lincoln from the last weeks of 1858 until the end of May in 1860, on the road to his unlikely Republication presidential nomination.

In tracing Lincoln's steps from city to city, from one public appearance to the next along the campaign trail, we see the future president shape and polish his public persona. Although he had accounted himself well in the famous Lincoln-Douglas debates, the man from Springfield, Illinois, he was nevertheless seen as the darkest of dark horses for the highest office in the land. Upon hearing Lincoln speak, one contemporary said, “I will not say he reminded me of Satan, but he certainly was the ungodliest figure I had ever seen." The reader sees how this "ungodliest" of figures shrewdly spun his platform to crowds far and wide and, in doing so, became a public celebrity on par with any throughout the land.

This is a story teeming with drama and intrigue about an event that no one could fathom occurring today...yet it absolutely happened in with America seven score and eight years ago, when Lincoln, the man, took his first steps on the way toward becoming Abraham Lincoln, the legendary leader and most respected president of American history.

"Anyone who has thought there was nothing more to be said about Lincoln will have to think again after reading Gary Ecelbarger's excellent new book, The Great Comeback. With impressive research and engaging prose Ecelbarger shows a fact of Lincoln's rise to the presidency that has never before been exploed and in the process weaves a tale that is as interesting as it is inspiring.”—Steven E. Woodworth, author of Nothing but Victory: The Army of the Tennessee, 1861-1865