George B. McClelland the Civil War History: In the Shadow of Grant and Sherman 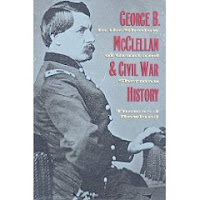 From the publisher:
Perhaps no other Union commander’s reputation has been the subject of as much controversy as George B. McClellan’s.

Thomas J. Rowland presents a framework in which early Civil War command can be viewed without direct comparison to that of the final two years. Such comparisons, in his opinion, are both unfair and contextually inaccurate. Only by understanding how very different was the context and nature of the war facing McClellan, as opposed to Grant and Sherman, can one discard the traditional "good general-bad general" approach to command performance. In such a light, McClellan’s career, both his shortcomings and accomplishments, can be viewed with clearer perspective.

As the subtitle suggests (In the Shadow of Grant and Sherman), the wartime records of Grant and Sherman and the handling of those records by McClellan critics, provide counterpoints for restoring perspective. Such simplicity makes this historiography easy for all. It is good reading that can be enjoyed by both the general public and Civil War specialists. - Trenton Times

Thomas J. Rowland is an instructor of history at the University of Wisconsin, Oshkosh. His articles have appeared in Civil War History, Catholic Historical Review, Eire-Ireland, and Journal of American Ethnic History.

From CWBN:
This book is a milestone in ACW historiography, marking a shift in the tide that is now cresting ten years later.

It is the first book-length study of McClellan's critics. From my Amazon review of 1999:

Its importance is magnified both by its challenge to consensus "truths" about McClellan and by the importance of McClellan himself to the early Union war effort. Well written, eminently reasonable, thoroughly informed of all the McClellan controversies, this is a volume for anyone who wants to delve just a little deeper than pop history. Rowland makes historiography (ugly word) easy and even enjoyable. I can't recommend this work highly enough.

I rated it ACW book of the year then and it is very much on my mind still. If you've ever overdosed on historians' emotional tirades and polemics, Rowland provides the antidote.

This is the paperback release of a previously published hardcover.