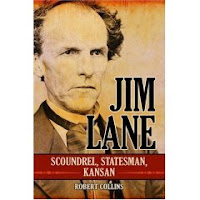 From the publisher:
James Lane was one of the most visible faces of the Free State movement during the Territorial period of Kansas's history. He was the most powerful politician west of the Mississippi River during the Civil War. This book addresses Lane's early life, military and political careers, and his controversial reputation as a fanatic who was responsible for leading Kansas into the Civil War