A South Divided: Portraits of Dissent in the Confederacy 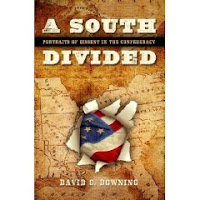 From the publisher:
When the civil war began, there were outpourings of patriotic fervor in the North and the South. Both sides, however, soon discovered that not all of their citizens were in aggreement and they would have to deal with dissidents throughout the war. Lincoln had to contend with guerrillas in Kentucky and Missouri, violent mobs in Baltimore, draft riots in New York City, and Copperheads and Peace Democrats. At one time or another, the U.S. president censored or suppressed three hundred opposition newspapers in the Northern states.

A South Divided is an account of Southern dissidents in the Civil War, at times labeled as traitors, Tories, deserters, or mossbacks during the war and loyalists, Lincoln loyalists, and Unionists by historians of the war. In recent years there has been an upsurge of interest in Southern dissenters among specific groups or communities. But A South Divided presents a panoramic overview of Southern dissent. What emerges is a complex pattern of dissent involving every state in the Confederacy and every year of the war.

A South Divided is the first book to tell these behind-the-battle-lines stories that have been largely overlooked by most historians of the war.

DAVID C. DOWNING is the R. W. Schlosser Professor of English at Elizabethtown College in central Pennsylvania and the author of six books, the most recent of which is Into the Wardrobe: C. S. Lewis and the Narnia Chronicles. He has been an avid student of the Civil War for nearly twenty years and has walked many of the battlefields and led tours of Gettysburg.