Lincoln: And the American Manifesto 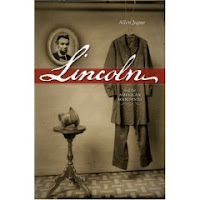 From the publisher:
"I have often inquired of myself, what great principle or idea it was that kept this Confederacy [nation] so long together. It was ... something in that Declaration giving liberty, not alone to the people of this country, but hope to the world for all future time ... that all should have an equal chance. That is the sentiment embodied in the Declaration of Independence.... I would rather be assassinated on this spot than to surrender it." -Abraham Lincoln, February 22, 1861

In this compelling study of the moral principles that most influenced the thinking of Abraham Lincoln [Lincoln and the American Manifesto], historian Allen Jayne argues persuasively that Lincoln regarded the Declaration of Independence, above all other documents, as the most important embodiment of American principles. This "American manifesto," as Jayne calls it, with its eloquent expression of the ideals of individual liberty and government created to protect and preserve that liberty, was the script that Lincoln followed in his struggle to preserve the Union and extend individual liberties to African Americans. Moreover, Jayne demonstrates that Lincoln's philosophy was rooted, not in a Bible-based evangelical Christian perspective, but in the European Enlightenment and deism, which so profoundly influenced the thinking of Thomas Jefferson and other Founding Fathers.

Jayne begins with a chapter devoted to the influence of deism on Jefferson's formulation of the Declaration of Independence. Next, he discusses Lincoln's adoption of the deistic perspective and the crucial role that the Declaration played in his thoughts and actions. He also considers Lincoln's moral sense, based on deism's tolerance of different belief systems and universal moral idealism. Finally, he describes Lincoln's role as chief advocate for the Declaration's principles and how the Gettysburg Address and his Second Inaugural Address reflect this underlying philosophy.

This insightful look into the thinking of one of our nation's greatest presidents during a time of crisis is highly relevant in today's climate of religious extremism and debates over the balance between individual liberty and national security.

From Publishers Weekly:
In this thorough examination of Abraham Lincoln's ideology, Jayne argues that Lincoln's greatest accomplishments-including his Emancipation Proclamation and Gettysburg Address-were heavily influenced by his unbending belief in the Declaration of Independence's primacy among the trappings of United States democracy. Tracing Lincoln's evolving and often contradictory views on slavery and race through pivotal historical moments such as the Dred Scott decision, Jayne demonstrates that Lincoln possessed a complex understanding of the ways slavery was entrenched in his nation, as well as a natural tendency toward prudence. Something of a "religious radical" himself, Lincoln's personal Christian theology-heavily influenced by deist thinkers like Theodore Parker-emphasized God above Jesus and placed great confidence in man's moral capacity; in Lincoln's eyes, that moral capacity formed the bedrock of democracy. Lincoln regarded the Declaration of Independence itself as a kind of national "ancient faith" and looked to it reverently, ultimately concluding that "those who deny freedom for others deserve it not for themselves," and, conversely, "In giving freedom to the slave, we assure freedom to the free." This volume will appeal as much to Civil War history buffs as to those who simply admire Lincoln as a singular leader and thinker.

From CWBN:
The idea that Lincoln gave primacy to the Declaration over the Constitution should be news to no one who has read Harry Jaffa. The politician Allan Keyes has built a mass movement around that insight.