Becoming Free in the Cotton South 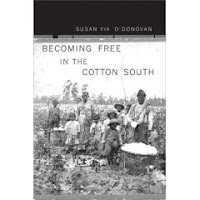 From the publisher:
Becoming Free in the Cotton South challenges our most basic ideas about slavery and freedom in America. Instead of seeing emancipation as the beginning or the ending of the story, as most histories do, Susan O'Donovan explores the perilous transition between these two conditions, offering a unique vision of both the enormous changes and the profound continuities in black life before and after the Civil War.

This boldly argued work focuses on a small place--the southwest corner of Georgia--in order to explicate a big question: how did black men and black women's experiences in slavery shape their lives in freedom? The reality of slavery's demise is harsh: in this land where cotton was king, the promise of Reconstruction passed quickly, even as radicalism crested and swept the rest of the South. Ultimately, the lives former slaves made for themselves were conditioned and often constrained by what they had endured in bondage. O'Donovan's significant scholarship does not diminish the heroic efforts of black Americans to make their world anew; rather, it offers troubling but necessary insight into the astounding challenges they faced.

Becoming Free in the Cotton South is a moving and intimate narrative, drawing upon a multiplicity of sources and individual stories to provide new understanding of the forces that shaped both slavery and freedom, and of the generation of African Americans who tackled the passage that lay between.

From reviewers:
Susan O'Donovan details the major changes for the slave and free black population of Southwest Georgia in the years of settlement, of the Civil War, and of the economic and political adaptations to emancipation. Of particular importance are the different impacts these changes had upon black men and black women, and upon the relations between belief and behavior in slavery and then in freedom.
--Stanley L. Engerman, University of Rochester

The seismic shifts set in motion by the emancipation reached into every corner of the American South. In exploring one small corner, Becoming Free reveals how the earthquake that accompanied freedom's arrival shifted gender relations in the household, field, and hustings and in the process changed much more. Susan O'Donovan's small story is a big story, an original one, and an important one.
--Ira Berlin, author of Many Thousands Gone and Generations of Captivity

As an exposition of how land, labor, and gender structured a hard slavery and a 'hard' emancipation as well, O'Donovan's analytical narrative is hard to beat. An exceptionally rich and textured study that never loses sight of the larger stakes.
--James C. Scott, Yale University

With meticulous and probing scholarship, O'Donovan's work acutely demonstrates the tragic continuities between slavery and freedom in the American South. Her analysis of the intersection of ethno-racial, economic and gender domination immediately after slavery illuminates a crucial period in African American history and radically alters conventional scholarly interpretations of the development of the black family. This exquisitely accomplished and engagingly written work is surely one of the most important studies in African American and Southern histories to appear in years.
--Orlando Patterson, author of Rituals of Blood: Consequences of Slavery in Two American Centuries