The Cherokee Nation in the Civil War 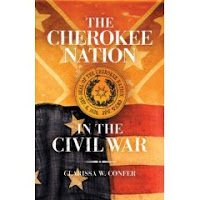 From the publisher:
No one questions the horrific impact of the Civil War on America, but few realize its effect on American Indians. Residents of Indian Territory found the war especially devastating. Their homeland was beset not only by regular army operations but also by guerillas and bushwhackers. Complicating the situation even further, Cherokee men fought for the Union as well as the Confederacy and created their own “brothers’ war.”

This book offers a broad overview of the war as it affected the Cherokees—a social history of a people plunged into crisis. The Cherokee Nation in the Civil War shows how the Cherokee people, who had only just begun to recover from the ordeal of removal, faced an equally devastating upheaval in the Civil War. Clarissa W. Confer illustrates how the Cherokee Nation, with its sovereign status and distinct culture, had a wartime experience unlike that of any other group of people—and suffered perhaps the greatest losses of land, population, and sovereignty.

Confer examines decision-making and leadership within the tribe, campaigns and soldiering among participants on both sides, and elements of civilian life and reconstruction. She reveals how a centuries-old culture informed the Cherokees’ choices, with influences as varied as matrilineal descent, clan affiliations, economic distribution, and decentralized government combining to distinguish the Native reaction to the war.

The Cherokee Nation in the Civil War recalls a people enduring years of hardship while also struggling for their future as the white man’s war encroached on the physical and political integrity of their nation.

Clarissa W. Confer is Assistant Professor of History at California University of Pennsylvania.