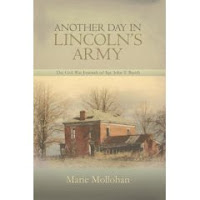 From the publisher:
In the introduction of his diary, Sgt. John T. Booth of Company G, 36th Ohio Volunteer Infantry, writes that the experience of a single soldier can never be considered a history of the conflict in which the soldier serves, but merely a reflection of his personal experience. Another Day in Lincoln's Army: The Civil War Journals of Sgt. John T. Booth brilliantly illustrates this concept, capturing the ordinary day-to-day life of the Civil War soldier.

From Western Virginia and Antietam Creek in Maryland to Chickamauga in the Tennessee mountains, this is the compelling story of Booth and the 36th Ohio Volunteer Infantry (OVI) in the American Civil War. One of only a few regiments privileged to have served in both the eastern and western theatres of the conflict, the 36th OVI fought in some of the bloodiest battles of the war. Booth eloquently journals the striking contrast between the often mundane activities of camp life and the horrifying sequences of battle.

Edited and compiled by Marie Mollohan, Another Day in Lincoln's Army also includes photographs of soldiers who served alongside Booth, letters and diary entries from other soldiers in the 36th OVI, and a mixture of feature stories from period newspapers, vividly bringing this extraordinary time in America's history to life.

About the Author
The eloquence and enthusiasm of Sgt. John T. Booth’s diary inspired Marie Mollohan to take on the task of preparing a history of the 36th Ohio Volunteer Regiment by putting together personal journals and letters from members of the regiment.