The Union Is Dissolved! (SC): Charleston and Fort Sumter in the Civil War 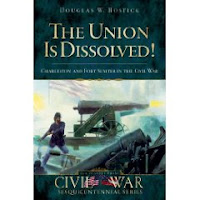 From the publisher:
Join Charleston historian Doug Bostick as he traces the political turmoil of 1860 and early 1861, when the firebrands of secession in Charleston were pushing the South to act together in a decisive way. The Union Is Dissolved! chronicles the face-off between professor and student - Robert Anderson and Pierre G.T. Beauregard - and the firing on Fort Sumter, signaling the beginning of the American Civil War. Featuring many historical images and first-person accounts found in period newspapers and family papers, this fascinating volume offers a concise introduction to our nation's greatest struggle.