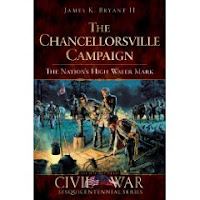 From the publisher:
The Chancellorsville Campaign was the true high water mark for both the Confederate Army of Northern Virginia and the Union Army of the Potomac. The campaign would be the Confederates' greatest battle, though it came at the cost of losing General Stonewall Jackson at the height of his military success and public popularity.

Although the Confederacy prevailed at Chancellorsville, 'Fighting Joe' Hooker used the defeat to institute a multitude of reforms in the Army of the Potomac, which paved the way for the hard-fought victory at Gettysburg and heavily influenced the Union winning the war.

Shenandoah University professor James Bryant weaves together a concise yet comprehensive account of the engagement, one brought to life by excerpts from the letters of Lee, Jackson and Hooker, as well as many other soldiers.