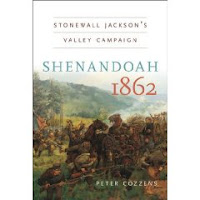 From the publisher:
In the spring of 1862, Federal troops under the command of General George B. McClellan launched what was to be a coordinated, two-pronged attack on Richmond in the hope of taking the Confederate capital and bringing a quick end to the Civil War. The Confederate high command tasked Stonewall Jackson with diverting critical Union resources from this drive, a mission Jackson fulfilled by repeatedly defeating much larger enemy forces. His victories elevated him to near iconic status in both the North and the South and signaled a long war ahead. One of the most intriguing and storied episodes of the Civil War, the Valley Campaign has heretofore only been related from the Confederate point of view. With Shenandoah 1862, Peter Cozzens dramatically and conclusively corrects this shortcoming, giving equal attention to both Union and Confederate perspectives.

Based on a multitude of primary sources, Cozzens's groundbreaking work offers new interpretations of the campaign and the reasons for Jackson's success. Cozzens also demonstrates instances in which the mythology that has come to shroud the campaign has masked errors on Jackson's part. In addition, Shenandoah 1862 provides the first detailed appraisal of Union leadership in the Valley Campaign, with some surprising conclusions.

Moving seamlessly between tactical details and analysis of strategic significance, Cozzens presents the first balanced, comprehensive account of a campaign that has long been romanticized but never fully understood.

Peter Cozzens is an independent scholar and Foreign Service officer with the U.S. Department of State. He is author or editor of nine highly acclaimed Civil War books, including The Darkest Days of the War: The Battles of Iuka and Corinth (from the University of North Carolina Press).