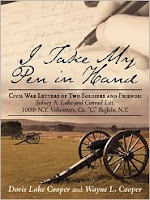 by Doris and Wayne L. Cooper

From the publisher:
I Take My Pen in Hand is a collection of Civil War letters written by Sidney A. Lake and Conrad Litt, farm boys and friends from Pembroke, N.Y. These two men served with the 100th N.Y. Volunteer Infantry, 'Eagle Brigade.' Conrad's letters describe the establishment of the regiment in 1862 and several battles, including the Battle of Fair Oaks. The 100th Regiment was in the first charge on Ft. Wagner with other regiments including the 54th Massachusetts (the first Negro regiment). Conrad Litt was killed in this charge on July 18, 1863 at Morris Island, South Carolina.

The letters of Sidney Lake tell of Conrad's death and describe the Battle of Ft. Wagner as well as other major battles. Sidney was discharged in 1865. Sidney's letters tell of events at Ft. Sumter, Bermuda Hundred, tunneling the mine at Petersburg, Virginia and the explosion at City Point, Virginia.

With the addition of 88 descriptive images: which include photographs as well as official records and reports, these letters come alive as we relive this time in history.