Black Troops, White Commanders and Freedmen during the Civil War 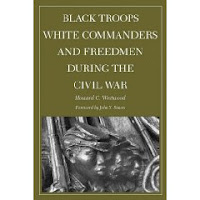 From the publisher:
In the ten probing essays collected in this volume, Howard C. Westwood recounts the often bitter experiences of black men who were admitted to military service and the wrenching problems associated with the shifting status of African Americans during the Civil War.

Black Troops, White Commanders, and Freedmen during the Civil War covers topics ranging from the roles played by Lincoln and Grant in beginning black soldiery to the sensitive issues that arose when black soldiers (and their white officers) were captured by the Confederates. The essays relate the exploits of black heroes such as Robert Smalls, who singlehandedly captured a Confederate steamer, as well as the experiences of the ignoble Reverend Fountain Brown, who became the first person charged with violating the Emancipation Proclamation.

Although many thousands were enlisted as soldiers, blacks were barred from becoming commissioned officers and for a long time they were paid far less than their white counterparts. These and other blatant forms of discrimination understandably provoked discontent among black troops which, in turn, sparked friction with their white commanders. Westwood's fascinating account of the artillery company from Rhode Island amply demonstrates how frustrations among black soldiers came to be seen as "mutiny" by some white officers.

The late Howard C. Westwood was a senior partner in the Washington, D.C., law firm Covington & Burling. He published carefully documented articles on the Civil War for more than thirty years and served as a director of the Ulysses S. Grant Association.