Irish-American Units in the Civil War 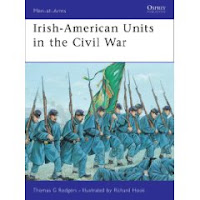 From the publisher:
Some 150,000 Irish-American immigrants served in the Union Army, most of them from Boston, New York and Chicago, and about 40,000 fought in the Confederate Army. The best known unit was the Irish Brigade of the Union Army of the Potomac, which distinguished itself at Antietam and, particularly, at Fredericksburg, where its sacrificial bravery astonished friend and foe alike. Famous regiments were New York's 'Fighting 69th', the 9th Massachusetts, 116th Pennsylvania, 23rd Illinois and 35th Indiana. Two Louisiana Confederate brigages from New Orleans were almost entirely Irish and several other Irish companies made a name for themselves at Shiloh, Chickamauga and other key battles. This book will give a brief overview of the history of the units on each side of the conflict and will be illustrated with uniform details, flags and archival photographs.

Thomas G. Rodgers is an Alabama University history graduate and librarian, and prolific contributor to the Company of Military Historians publications on American Civil War units. The author lives in Eufaula, Alabama.