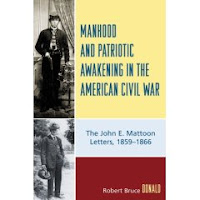 From the publisher:
It has been over sixty years since the first book that tried to explain the life and lot of the common soldier in the American Civil War was published. Since Bell Wiley's Life of Johnny Reb (1943), there have been many thousands of pages devoted to the troops and the social history underlying the conflict of the Civil War. Within that historical record, one question still captivates and provokes: why did they fight?

John E. Mattoon was certainly one such "common" soldier, aside from his uncommonly interesting and expressive letters. This book constitutes a valuable case study illuminating the motives, experiences, and ultimate realizations of a young cavalry volunteer. The exploration of John's personal motivations and the actions of his peers adds further clarity to our body of knowledge, which may force us to reassess some preconceived notions about the prototypical Union soldier. Scholarly research adds historical context to provide colorful depth and flesh to a developing interpretation of John's experiences. A refreshing approach to an old conflict-students, teachers, and anyone interested in the personal side of war will benefit from the firsthand glimpse of Manhood and Patriotic Awakening.

Robert Bruce Donald is a graduate of Middlebury College in Vermont and earned his Master's Degree in History from Trinity College (Hartford). He has worked in finance and marketing, then as a consultant producing a multitude of documents over many years. But it is a life-long interest in the study of history that has happily produced this book.